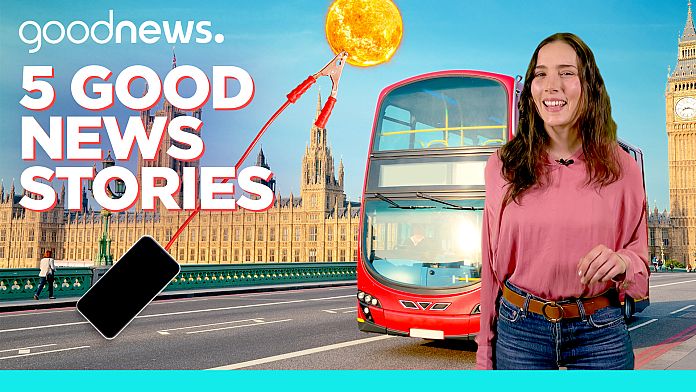 Welcome to the good news roundup, your weekly roundup of what’s going well in the world. We have five positive news for you:

In 2017, researchers from a Swedish university created a system capable of capturing and storing solar energy for up to 18 years. The invention was a radical step, but a great challenge remained: to transform this reserve of solar energy into electricity.

Last month, Swedish scientists from Chalmers University sent a sample of their captured sun to Shanghai, where researchers from Jiao Tong University were able to convert it.

“We have worked on developing molecular systems capable of capturing sunlight, storing it and releasing it as heat on demand. The novelty is that we have developed a device capable of transforming this heat into electrical energy in a very local way.” said Kasper Moth-Poulsen, a professor at Chalmers University of Technology.

The new generator is an ultra-thin chip that could be integrated into electronic devices such as headphones, smartwatches and phones.

Prof. Moth-Poulsen said he was “very excited about this work”, which could potentially replace batteries, offering us a new way to harness the sun’s energy and help the climate by keeping our essential electronics active.

Read more about this twist here.

2. The man who wins € 200 million in the lottery spends almost everything to start a charity

So you won the lottery. You have 200 million euros in your pocket. What do you spend it on first? A yacht? Maybe a penthouse in Paris? Private island?

A man in France who found himself in this fortunate position decided on something a little different. He used his jackpot winnings – nearly all of them 200 million – to create an environmental foundation to protect forests and increase biodiversity.

The man, whose true identity remains a mystery and who used Guy’s pseudonym, said in an open letter that his “dream has never been to acquire boats, castles or sports cars, is to be useful and give a sense to this money, with the maximum positive impact “.

He called the Anyama foundation after a city in the Ivory Coast where he spent time. He said, “The Anyama Endowment Fund is the result of a desire to act for nature and humans, which I have for years,” adding that “giving makes people happy and is a tremendous lever for turning indignation into concrete and useful Actions “.

Isabelle Césari, in charge of relations with the big winners of Française des Jeux, the French lottery operator, said the donation was a “big first”.

Césari says a donation of this proportion is quite exceptional: “Generosity emerges very often among our winners. Very often it concerns their inner circle, with the idea of ​​giving to those they love, but also to those who do not have. had the same luck in life “.

3. The initiative turns the big red buses into care centers for the homeless

London buses are being transformed into mobile health centers, funded by a coffee company called Change Please, which uses 100% of its profits to fund charities.

And now they have launched Driving for Change, which will see three London buses equipped to support the homeless. They will be able to see medical staff and dentists, open tailor-made bank accounts for non-permanent residents, and receive advice on how to find work.

One of the buses will have showers and hairdressers on board because, as Henrietta MacEwen, Head of Driving for Change, told Euronews: “This is important. People forget that it is so important for homeless people to feel good about themselves as much as they are on board. on the street. They can get on board, be looked after and looked after. “

Another bus boasts a full dental suite and a nurse. MacEwen said: “One of the biggest problems [for] the homeless are their teeth. [Their circumstance make it very difficult to] find a place to go and brush your teeth every night or every morning. “

The third bus is in the works and will focus on women’s mental health and problems, “because women are the silent homeless,” says MacEwen.

The buses travel in and around London and have seen more than 250 people since they launched in November. MacEwen says Driving for Change will help with the little things we can do to help someone feel human again – “to help them feel they’ve been seen.”

4. The largest animal crossing in the world spans one of the busiest freeways in California

The largest animal crossing in the world will begin construction this month on one of the busiest freeways in the United States. It will be 64 meters long and 50 meters wide and will connect the mountainous areas currently divided by the road, allowing animals such as protected coyotes, lizards and pumas to move between the two areas safely.

More than half of the cost will be funded by private donations, including $ 300,000 from the Leonardo DiCaprio foundation. The rest will come from public funds set aside for conservation purposes.

Robert Rock, the landscape architect who led the design, says this type of nature-focused construction makes it unusual among other wildlife bridges. The California Animal Crossing is designed to blend into the environment on both sides.

Unlike a traditional highway overpass, the crossing will support wildlife and provide the habitat, shelter, food and water that individual species need to thrive.

In Northumberland, in the north of England, locals are helping save lives in Ukraine by doing what they have done best for millennia: brewing beer.

The town of Twice Brewed has a brewing tradition that dates back to Roman times. And a brewery based there has joined a collective of local brewers who are raising money for Red Cross humanitarian work in Ukraine – with a beet-based beer, a traditional ingredient in Ukrainian cuisine.

The beer, called Resist and described as a Ukrainian anti-imperial stout, was developed by Ukrainian brewers displaced by the drinkers’ campaign in Ukraine. They shared their recipe online and appealed to breweries around the world to make it and donate the proceeds to the Red Cross.

Brown added: “Nobody takes [any money] from it at all, not even to cover the goods. We have donated all of our time for free or donated energy or resources, so there are no expenses to cover. “

The beets were donated by a local company that makes jams and chutneys.

Read more about the initiative here.