West Coast forward Josh Kennedy has announced he will retire after Sunday’s AFL clash with Adelaide at Optus Stadium.

Kennedy, who turns 35 later this month, says an ongoing knee issue was the main reason behind his decision to retire this year.

The 292-game veteran will be remembered as West Coast’s greatest ever forward, having booted 707 goals for the club.

He also kicked 11 goals across 22 games for Carlton in the first two years of his career.

“My knee is a big reason for retiring,” Kennedy said.

“I think my drive to play is still there, but I’m realistic my body is not going to be able to take me to another season.

“To be able to farewell West Coast supporters one last time at Optus Stadium and say thank you for the incredible support over the years will be the perfect way to finish my career.”

Kennedy’s decision to retire this week means he will skip the away western derby against Fremantle in round 22, and the final-round clash with Geelong at GMHBA Stadium.

He ends his career as a three-time All-Australian, a dual Coleman medallist, and a premiership player.

“Josh is going to be one of the game’s greats and one of the club’s greats,” Eagles coach Adam Simpson said.

“What he’s done in my time at the club, it’s just been a pleasure to see and watch. Coleman Medals, the ability to stand up in big games. Clutch, not just goals, but clutch moments.

“I can remember the prelim against North Melbourne in 2015 where we were 20 points down, hadn’t scored a goal, and he took this contested mark 50m out and just rolled and slotted it.

“That just sums him up. He’s a big-game player, but he also loves his teammates and loves his club.”

Port Adelaide forward Steven Motlop says he will look back on his AFL career with fondness despite falling agonisingly short of featuring in a grand final.

Motlop arrived at Port Adelaide via free agency at the end of 2017, and he tasted more preliminary final disappointment in 2020 and 2021.

“14 years is a long time in the game, especially in the position I play,” Motlop said of his decision to retire.

“It was always a childhood dream to play in the AFL and I’ll always be grateful to Geelong and to Port Adelaide for giving me the opportunity to achieve that dream. 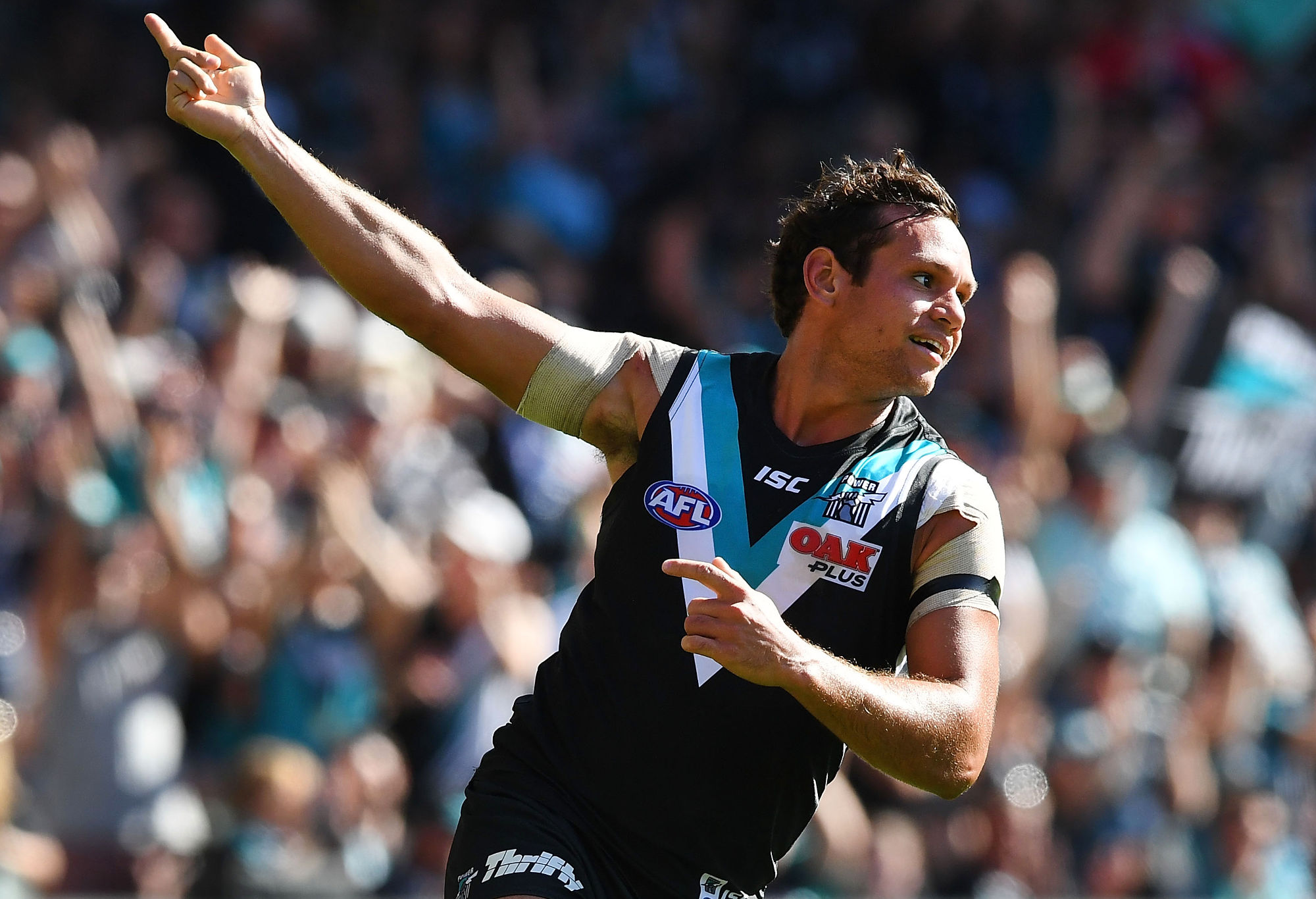 “As a kid you just want to play in finals. I played in five preliminary finals and while it would have been nice to have won one, playing in those big games alongside my teammates is something I’ll always look back on fondly.”

His brother Daniel played for six seasons with the Power between 2006-2011, and his cousin Marlon also represented the club between 2008-2011.

“There’s been a rich history of my family playing at Port Adelaide and to be able to get the opportunity come over to Adelaide, where my family was set up was a big part of why I moved across,” Motlop said.

“It means a lot to say I had the chance to play at the club where I have such strong family links.”

Motlop booted 229 goals across his career – the most famous of which came in the 2018 Showdown against Adelaide when he dodged and weaved through traffic to kick the match-winner from 40m out with just 24 seconds remaining.

Motlop joined Geelong with pick 39 in the 2008 national draft, was nominated as an AFL Rising Star in 2012 and part of the All-Australian squad in 2013.

Pendlebury pipes up for Ginnivan

Collingwood captain Scott Pendlebury believes teammate Jack Ginnivan is suffering from unwarranted treatment from umpires, saying the 19-year-old is being officiated differently from the rest of the competition.

Ginnivan again made headlines in his side’s narrow win against Port Adelaide, as he was penalised for holding the ball despite being hit above the shoulders by Power veteran Robbie Gray.

The young Magpie had again appeared to drop his body into the tackle, in effect creating the high contact.

It came just a week after a similar incident when he was hit high by Essendon’s Mason Redman, with the AFL later releasing a statement suggesting Ginnivan was responsible for the initial contact.

But Pendlebury suggested he was being singled out for that treatment by umpires and was far from the only footballer playing that way. 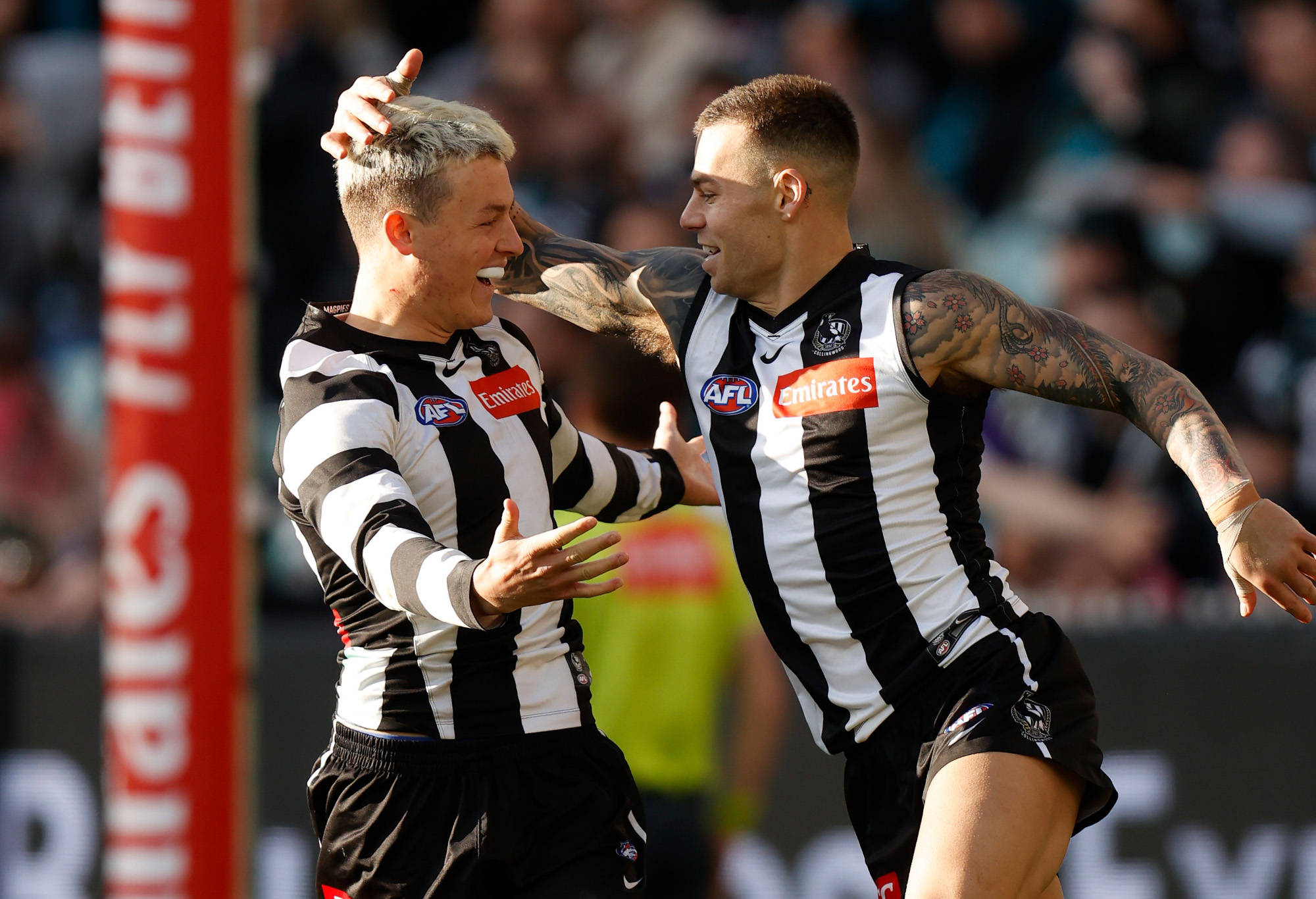 “It’s a bizarre situation playing, because as much as you don’t want to shine a light on it, it does feel for some reason every time he gets the ball it’s a different set of rules,” he told Triple M.

“It shouldn’t feel like that, and I don’t know if they’re officiating the correct way with him and then they’re still a little bit behind with other players.

“I’ll give you the hot tip, he’s certainly not the only guy in the AFL that knows how to shrug a tackle.

“Because he’s been made the example of, everyone’s hot on him and not so hot on other players.”

Ginnivan kicked three goals in the win to continue a breakout season in which he’s scored 32 majors.

Melbourne coach Simon Goodwin admits young ruck Luke Jackson has a monster decision facing him as speculation ramps up he’ll leave the Demons and head to Fremantle at the end of the AFL season.

But the Demons boss implored the 20-year-old not to let his future plans distract him as they approach the finals in a great position to win back-to-back premierships.

Jackson is out of contract at the end of the campaign and the Dockers are believed to have tabled an offer worth around $5 million to bring him back to his home state.

Goodwin said he had maintained a dialogue with Jackson about his future.

“I’ve had some great chats with Luke and some were honest chats about we just want him to perform for the Melbourne footy club, however long that may be,” he told Fox Footy.

“Our responsibility as a club is to be mature in our approach towards that end, and get the best out of the Luke for however long he’s at our footy club … those conversations have been held with Luke and he’s embraced it.

“We’ve said to Luke all along, ‘you take as much time as you need’.

“He’s got the chance to go home at some stage throughout his career and he’s got a footy club that he loves at the moment, so it’s a big decision for him to make.”

Jackson has played 47 games with the Demons since being picked No.3 in the 2019 draft, kicking a goal in their grand final win last year.

That would create an NRL scenario where players often play entire seasons for a side despite having publicly announced they’ll be turning out for another club the following year.

“That probably seems the mature way to do it, I just don’t know whether we’re ready for that and whether all clubs will be comfortable,” Fagan said.

“Some players might feel like if they say they’re going, that would endanger their chances perhaps for selection for the rest of the year or the club might turn in a different direction.

“I don’t know whether we’ve arrived at that level of maturity with football yet, I’d like to think so.”

Richmond’s Marlion Pickett is free to play this weekend after avoiding a ban for putting Brisbane’s Zac Bailey in hospital.

Pickett hit Bailey in the chest with an open hand, with the Lion spending Sunday night in a Melbourne hospital after leaving the MCG coughing up blood.

Bailey has since been cleared of serious injury and has returned to Queensland.

The match review officer didn’t cite Pickett for the hit, having interviewed Bailey and found he didn’t know if he’d sustained the injury from the strike, or an earlier bump from the Tiger.

However Pickett was offered a $3000 fine for a separate incident where he engaged in rough conduct with Brisbane’s Rhys Mathieson.

Essendon’s Jake Kelly and North Melbourne’s Jed Anderson have each been offered $1000 fines for their part in a melee during Essendon’s 48-point win on Sunday.

Kangaroo Charlie Lazzaro has also been cited, offered a $2000 fine for a dangerous tackle on Essendon’s Nick Hind.

Richmond’s Trent Cotchin can also accept a $1000 fine for misconduct.