Stephen Curry #30 of the Golden State Warriors celebrates with teammates after defeating the Boston Celtics 103-90 in Game Six of the 2022 NBA Finals at TD Garden on June 16, 2022 in Boston, Massachusetts. (Photo by Adam Glanzman /Getty Images via AFP)

The tears began to flow for Stephen Curry shortly before the clock ran dry, as the Golden State Warriors merely had to wait for their fourth championship in eight seasons to become official.

A two-time regular-season MVP, Curry was named NBA Finals MVP for the first time, scoring 34 points on Thursday as the Warriors returned to NBA glory with a 103-90 victory over the host Boston Celtics in Game 6 of the Finals.

Andrew Wiggins scored 18 points and Jordan Poole added 15 as Golden State came out on top just two seasons after finishing a league-worst 15-50. That rough year came amid injuries to Klay Thompson, who scored 12 on just 5-of-20 shooting Thursday in the finale of the best-of-seven series, and Curry.

Both stars were in good health and on top of the world in Game 6, standing side by side during a team hug after the final buzzer. Curry landed the Finals MVP honor after averaging 31.2 points in the six games as the Warriors won the championship for the first time in four years.

An emotional Stephen Curry on the floor as he wins his 4th NBA Championship #NBA75 pic.twitter.com/gCQ4ZwJtKy

“You always have a doubt, but you know how long the road is to get back here because how hard it is to win at this level,” Curry said on the ABC broadcast when asked about the path from worst record in the NBA to champion in three seasons. “We found a way to just get it done.”

Draymond Green contributed 12 points, 12 rebounds and eight assists for the Warriors, who won despite shooting 41.3 percent from the field. Afterward on the edge of the trophy-presentation stage, Curry, Thompson and Green sat arm in arm with four fingers raised to represent their shared titles.

“I knew it was a possibility, but to see (a championship) in real time … holy cannoli, this is crazy,” said Thompson, who missed two full seasons with knee and Achilles injuries and didn’t return until Jan. 9 this season.

“Forget that we champs… We got 4 championships” pic.twitter.com/Mb58PMLLNu

Jaylen Brown scored 34 points and Al Horford added 19 points and 14 rebounds for the Celtics, who were making their first NBA Finals appearances since 2010. Boston last won the championship in 2008.

Celtics star Jayson Tatum was held to 13 points on 6-of-18 shooting.

“We’ve still got a lot to learn as a group (and) individually,” Brown said. “As much as we may have grown and turned our season around, we still have to learn a lot about the game of basketball. …

“It stinks to come up short, but the future is bright.”

The only blemish on the Warriors’ day was brief, when they trailed 14-2 after four minutes following a 12-0 run by the Celtics. Boston led 22-16 late in the first quarter before the Warriors erupted for a 21-0 run to take a 37-22 lead with just over 10 minutes remaining in the half. 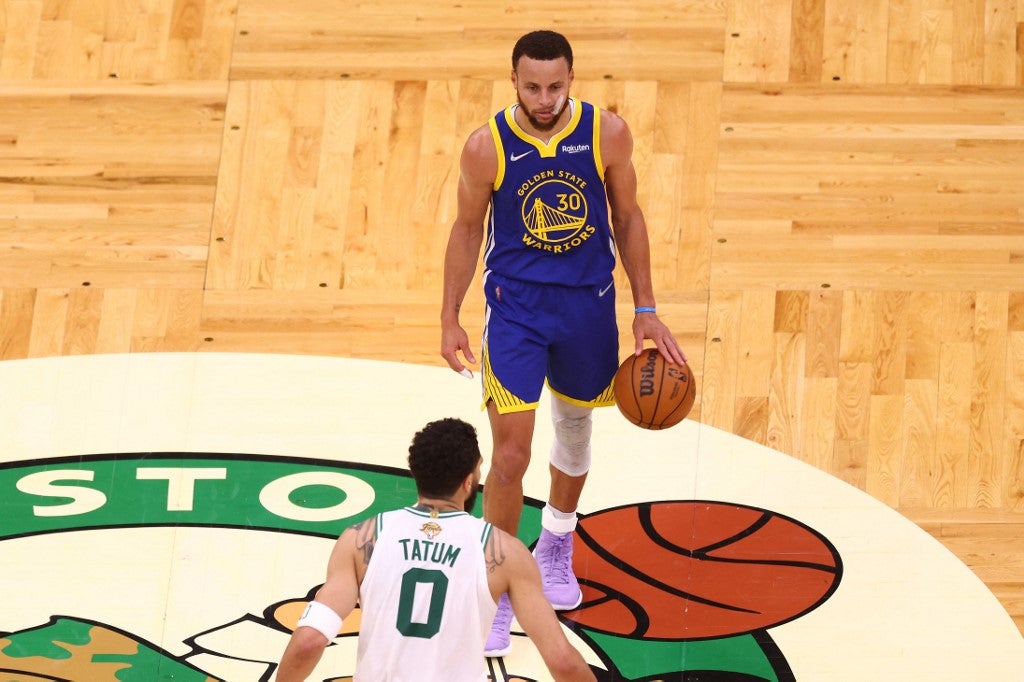 Stephen Curry #30 of the Golden State Warriors dribbles up the court against the Boston Celtics during the second quarter in Game Six of the 2022 NBA Finals at TD Garden on June 16, 2022 in Boston, Massachusetts. Adam Glanzman/Getty Images/AFP

When Curry drilled three 3-pointers in the first six minutes of the third quarter, Golden State pushed its lead past the 20-point mark, 72-50. Curry nodded his head and began pointing to his ring finger.

“We built this for like 10 or 11 years and that means a lot when you get to this stage because you know how to win,” Curry said. “Everybody who has been a part of this knows what that is about. This one hits different for sure.”

The Celtics did pull within single digits, at 74-65, on a three-point play by Al Horford with 44.1 seconds remaining in the third, and the Warriors were up 76-66 heading into the final quarter.

The Celtics never got inside of eight points the rest of the way as they were done in by 23 turnovers. Curry sealed the victory on a 3-pointer with 3:17 remaining that gave Golden State a 96-81 lead.

“It’s gonna hurt, and it’ll hurt for a while. That stuff never goes away,” Celtics coach Ime Udoka said. “That was part of the (postgame) message: Let it propel us forward after the experience and growth and progress we made this season.”

After an opening-round sweep of the Brooklyn Nets in the first round of the playoffs, the Celtics went just 4-6 on their home court the rest of the way.