TOHO announced on Friday that it and CG studio Orange (BEASTARS, Land of the Lustrous) are producing a new anime based on Yasuhiro Nightow‘s Trigun manga titled Trigun Stampede that will debut in 2023. Crunchyroll also announced that it will simulcast the anime upon release “in more than 200 countries and territories around the world.”

Crunchyroll will host a panel at Anime Expo on July 2 which will announce more information about the anime. Guests for the panel will include designer Kouji Tajima (GANTZ:O character artist), Orange producers Kiyotaka Waki (Godzilla Singular Point) and Yoshihiro Watanabe (BEASTARS), and TOHO producer Katsuhiro Takei (your name.).

A new Twitter account named “@6MillionBounty” teased a new announcement on Thursday with an image. The image depicts a torn Wild West-style wanted poster with a bounty. Within Yasuhiro Nightow‘s Trigun universe, the main character Vash the Stampede is known as “The $$60,000,000,000 (sixty billion double dollar) Man,” for the bounty on his head. 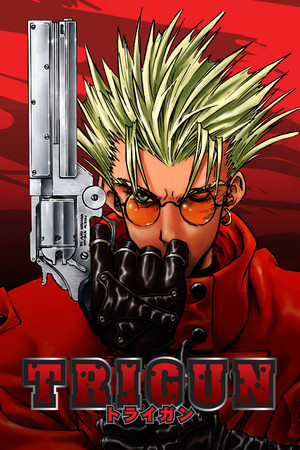 Madhouse‘s original television anime adaptation aired for 26 episodes in Japan in 1998. The anime launched in North America for home video in 2000. Geneon Entertainment (formerly Pioneer) originally released the series on DVD, but Funimation has since licensed the series and released it on Blu-ray Disc and DVD. The series is now streaming on Crunchyroll following Sony‘s Funimation Global Group’s acquisition of Crunchyroll from AT&T. Cartoon Network‘s Adult Swim programming block aired the anime in 2003.

The Trigun anime adapts Yasuhiro Nightow‘s manga of the same name. The story follows the misadventures of Vash the Stampede, a gunman on the lam with a “60 billion double dollar” bounty on his head. Vash earned his “Stampede” nickname thanks to the destruction that zealous bounty hunters wreak on any town he visits.

The Trigun: Badlands Rumble anime film debuted in April 2010 and was the first new Trigun animation in over a decade. The anime’s world premiere was at Sakura-Con in April 2010, although the anime Studio Madhouse‘s plans for the project date back to 2005. Cartoon Network‘s Toonami programming block also aired the film.

Based on a story by original manga creator Nightow and director Satoshi Nishimura, the film follows Vash the Stampede and the outlaw Gasback in a period before the original anime’s finale. Vash journeys to a town surrounded by quicksand where Gasback has a conflict with the mayor. As the story unfolds, Vash discovers his actions 20 years ago incited the current troubles involving bounty hunters, bodyguards, and vendettas.

Orange revealed on June 10 that it would announce a new project on June 17.

Orange president and founder Eiji Inomoto revealed in an interview during Anime Limited‘s Cloud Matsuri online event in June 2020 that the company was working on a CG remake of an unnamed title that “might be familiar.”

Orange debuted its original short anime “HOME!” on YouTube on Tuesday. The studio is known for its adaptation of Haruko Ishikawa’s Land of the Lustrous manga, and most recently, Paru Itagaki‘s BEASTARS manga. The studio has also done CG work for parts of various anime productions as far back as 2004’s Aquarion television series.