China has claimed that it may have received a message from an alien civilisation using its $180 million Sky Eye telescope, according to reports.

Sky Eye, a 1,640-foot-diameter telescope based in China’s Guizhou province, has detected unusual electromagnetic signals that scientists claim could have alien origins.

But according to Bloomberg, Science and Technology Daily deleted the report shortly after it was posted, although it’s uncertain why. 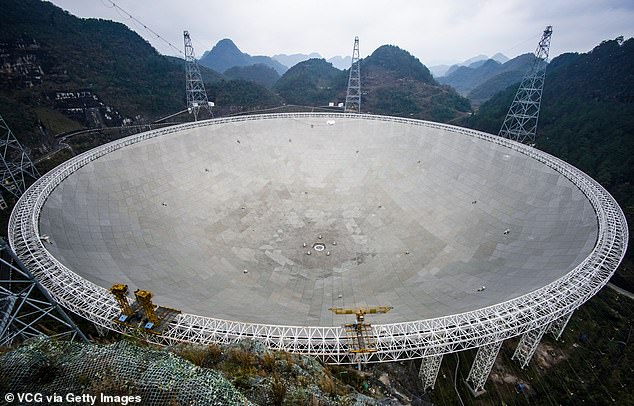 Five-hundred-meter Aperture Spherical Telescope, also known as FAST or Sky Eye, is based in a natural basin in Guizhou

It’s based in the Dawodang depression, a natural basin in Guizhou.

It was launched in September 2020 specifically to search for alien life and potentially habitable exoplanets – planets outside our solar system.

‘Sky Eye telescope may have picked up signs of life beyond Earth, according to a report by the state-backed Science and Technology Daily, which then appeared to have deleted the report and posts about the discovery,’ Bloomberg says.

‘The news had already started trending on social network Weibo and was picked up by other media outlets, including state-run ones.’

The team detected two sets of suspicious signals in 2020 while processing data collected in 2019, and found another suspicious signal in 2022 while observing exoplanets – planets outside our solar system.

Zhang said the suspicious signals could also be some kind of radio interference, so further investigation is required.

MailOnline has contacted the National Astronomical Observatory of China for comment.

Currently, no life beyond Earth has ever been found, but this does not mean that the universe is lifeless other than on Earth, according to NASA.

The US space agency says: ‘While no clear signs of life have ever been detected, the possibility of extraterrestrial biology – the scientific logic that supports it – has grown increasingly plausible.’

Due to its size, Five-hundred-meter Aperture Spherical Telescope, also known as FAST or Sky Eye, has one of the best chances of discovering alien life.

It was launched in September 2020 specifically to search interstellar communication signals that suggest alien life and potentially habitable exoplanets.

As its official name suggests, FAST has a diameter of 500 meters (1,640 feet), making it the world’s largest full dish radio telescope. 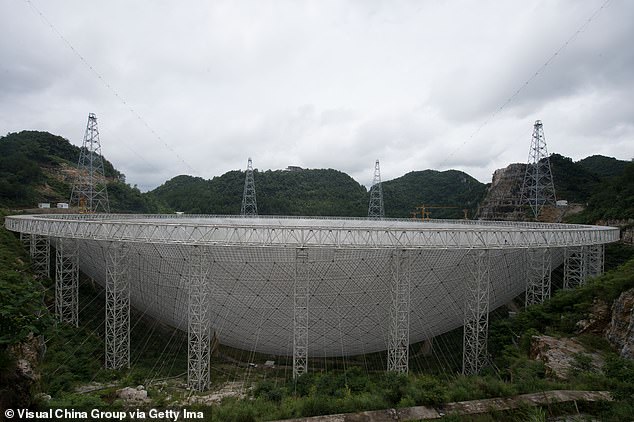 The dish-like telescope, as large as 30 football fields, costed 1.2 billion yuan (about $180 million) 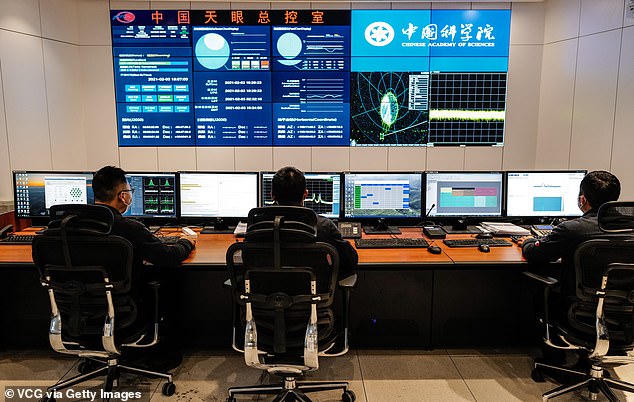 It’s able to scan twice the sky area covered by the Arecibo Observatory in Puerto Rico, the previous record holder for the largest single-aperture radio telescope in the world.

FAST can deliver readings between three and five times more sensitive than those from Arecibo Observatory, which is why scientists have been hopeful the telescope could lead to a breakthrough in the search for alien life.

A 65-person village was destroyed before construction of FAST began, and more than 9,000 people in the surrounding countryside were forced to relocate to create a three-mile radius around the telescope without any electromagnetic interference.

According to government officials, each person was given the equivalent of $1,800 in compensation for the relocation.

ALIEN LIFE MAY BE TOO SCARED OF ‘DANGEROUS’ HUMANS, EXPERT CLAIMS

Sci-fi films and TV shows have routinely depicted a brutal race of aliens visiting Earth in their spaceships and enslaving unfortunate Earthlings.

But according to one expert, extraterrestrial life may actually be too scared of ‘dangerous’ and ‘violent’ humans to want to come here.

Dr Gordon Gallup, a biopsychologist at the University of Albany, argues that humans are ‘dangerous, violent and ceaselessly engage in endless bloody conflicts and war’.

As an example, Dr Gallup cites ‘the total destruction of the highly advanced Aztec and Inca civilizations’ and the subsequent genocide of the native people, their temples and buildings destroyed and their wealth and natural resources stolen.

For this reason, aliens with the technological capability of making a visit to Earth – if they exist – are likely inclined to stay away for fear of death and genocide, according to Dr Gallup.