Americans are feeling the pain of petrol inflation every time they pull up to the pump. But a supersized surge in the cost of diesel is adding to economically damaging price rises just about everywhere else.

The national average price of diesel hit a fresh peak of $5.72 a gallon this week, up 75 per cent over the past year, according to data released on Monday by the US Energy Information Administration. It is one of the sharpest fuel cost increases on record. The national average price of petrol, which cracked $5 a gallon on Saturday, has risen about 60 per cent over the same time.

The surge in the price of diesel, a workhorse fuel, is coursing through the US economy, helping to push price increases in the world’s largest economy to 40-year highs. US government data on Friday showed the inflation rate in May accelerated to 8.6 per cent compared with the previous year, the highest level since 1981.

“Big parts of the economy run on diesel, from agriculture to manufacturing, and thus the surge in diesel prices is driving up prices broadly,” said Mark Zandi, chief economist at Moody’s, who says diesel prices account for about a fifth of the rise in consumer inflation.

The nation’s fleet of truck drivers is at the frontline, with small and big trucking companies saying they are passing hefty fuel surcharges on to their customers to try to offset the sudden rise in costs.

“It’s devastating really to everybody . . . because it’s so inflationary,” David Owen, president of the National Association of Small Trucking Companies, said of the sharp rise in diesel prices.

“Fuel surcharges are being implemented across the board.”

Bart Plaskoff, president of Summit Trucking in Dallas, Texas, said he was paying $70,000 more a week on fuel than he was at the beginning of the year and was telling his truckers to limit idling time and to try to fill up in states with lower taxes to save money.

Even accounting for fuel surcharges, he warned that some truckers could struggle to survive the high costs, which could pull trucks off the road and further drive up transportation costs.

High fuel prices “could impact the industry as a whole long after fuel prices stabilise. Truckers are the backbone of the American economy. Without them you have no groceries, gas, baby formula, prescriptions, furniture, or even your Amazon package,” said Plaskoff.

Because they are less likely to be able to negotiate rates or receive fuel discounts, small trucking companies are those hit hardest by high diesel prices. According to the American Trucking Associations, 97 per cent of trucking companies run 20 trucks or fewer.

Retailers, in turn, say they are passing higher costs from trucking and other transport on to their customers to preserve profit margins.

“There’s higher transportation costs across the whole supply chain whether it’s ocean freight or trucking or the price of fuel,” Bob Nelson, a senior vice-president at Costco, one of America’s largest retailers, told Wall Street analysts last month. “Eventually, those costs make their way into your sale price.”

Target said it would have to pay an extra $1bn on freight and transportation costs this year than it had expected at the start of the year, citing it as one of the main drivers of slumping profitability.

High diesel costs are also being felt on farms across the country, pushing up the price of food at supermarkets and restaurants.

“All of our equipment runs on diesel . . . Fuel costs are just killing us,” said Don Cameron, general manager at Terranova Ranch, a farming operation in California, where diesel prices are nearing $7 a gallon, far higher than the national average. Cameron also serves as president of the state’s Board of Food and Agriculture.

Cameron’s farm, which employs 65 people full-time and far more during harvest season, grows crops such as fresh produce and almonds that go to large restaurant chains and food processors. He said he had to negotiate price increases of 25 per cent for some of his crops this year, and another 25 per cent increase next year was not “out of the question”.

There is little sign of relief in the coming months with diesel prices continuing to surge, complicating the Federal Reserve’s efforts to tamp down inflation and posing political problems for President Joe Biden, who has seen his approval rating dragged down by persistently high inflation.

Crude oil prices, the main driver of the cost of diesel, continue to rise because of tight supplies. The world’s oil refiners, after a wave of shutdowns as the pandemic inflicted heavy financial losses on the sector, are struggling to keep up with stronger than expected post-pandemic fuel demand. 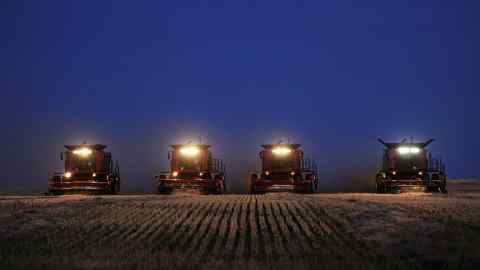 US oil producers themselves rely on diesel to fuel trucks that ferry workers, equipment and materials such as water and fracking sand to remote oilfields, and to operate powerful drilling and fracking machinery. A single well can require tens of thousands of gallons of diesel before it starts producing oil.

The cost for producers, however, is at least partly offset by higher prices for crude. Goldman Sachs says that it expects Brent crude prices to average $135 a barrel through the rest of the year, higher than the current price of about $122 a barrel.

Rob Sladek, owner of JCS Family Farms in Iowa, said his added fuel expense was piling economic pain on top of the already rocketing costs of fertiliser and other agricultural inputs.

“It’s like asking, ‘Which tooth on the chainsaw killed you?’ It’s just one of the many,” he said.