Jerri-Lynn here. India is not alone in currently suffering through a deadly heatwave. This timely post contains useful information on how to beat the heat – welcome advice as climate change is making heatwaves more frequent – and potentially deadly – in many places around the world, including those that haven’t previously suffered much from them.

I try to avoid using  air-conditioning as much as possible , turning on a small room -sized air conditioner for an hour or so to cool the bedroom just before I go to sleep. Such -a strategy may become a necessity for many as rising energy prices make cooling one’s space prohibitive – or even for those willing to pay higher costs, power cuts and brownouts achieve the same end.

When spring creeps around the corner, pediatrician Aaron Bernstein starts counseling his Boston-area patients and their families about extreme heat action plans.

“The first heat wave of the year is routinely the most harmful,” says Bernstein, who also directs Harvard’s Center for Climate, Health, and the Global Environment. He wants patients to start planning early about how they are going to stay safe when the mercury rises.

He draws on his experiences as a medical student in Chicago in 1995, when an unexpected heat wave blistered the city. More than 700 people died, many of them low-income, elderly residents without air conditioning.

The Chicago heat wave was considered a historic event – a disastrous anomaly – but as the world warms, deadly heat waves have become more commonplace. In southern Europe in 2003, Russia in 2010, the Pacific Northwest in 2021, India and Pakistan in 2022, and elsewhere, hundreds to tens of thousands of people have perished during extreme heat events.

Heat Waves Are Getting Worse

The scientific consensus is clear: Climate change will continue to cause record-breaking temperatures that are more frequent, more intense, and longer-lasting.

“The heat of the current era is unprecedented in our species history,” Bernstein says. “That’s why we have particular concern about our body’s physiological ability to deal with the kinds of heat we’re dealing with.”

But Kristie Ebi, a University of Washington climate and health researcher, says it’s critical to recognize that hospitalizations and deaths related to heat are preventable.

Prevention starts with a recognition of when the temperature is getting too hot to handle, Ebi explains. You may have a different limit based on your age, health conditions, and environment.

How to Stay Cool in Hot Weather

Improving access to air conditioning is a key strategy for reducing heat-related illnesses and deaths.

“A lot of our interventions traditionally really focused on reducing the temperature of the air that surrounds us instead of cooling people themselves,” says Ollie Jay, director of the Heat and Health Research Incubator at the University of Sydney. Jay’s research focuses on sustainable and accessible ways to prevent heat illness and death.

Though access to air conditioning helps prevent deaths from heat, relying mainly on AC may not be an ideal solution. In urban areas with a lot of AC use, waste heat from the units can make the local environment even hotter. And the carbon pollution caused by running AC can fuel further climate change, leading to hotter temperatures in the future.

Financial costs may also make it inaccessible. And AC is useless during blackouts or brownouts because the units need power to run.

Jay says a more sustainable solution is to turn fans on and turn up the thermostat on the air conditioner. Fans help increase airflow across the skin, keeping people cool and comfortable, even with the air conditioner set at a higher temperature.

Fans can also be helpful for cooling when air conditioning is not available. But fans may not always be the right solution, especially in dry conditions.

“Under certain circumstances, particularly for certain types of people, these devices can actually aggravate the problem really quite significantly,” Jay says.

In his lab, Jay took research participants into a climate chamber, a research facility where human subjects can be exposed to a variety of temperature and humidity settings in a monitored environment. Within the climate chamber, he recreated the conditions of two deadly heat events: the hot and humid Chicago heat wave, where temperatures rose above 102 F (39 C) and humidity was 50-60%, and the 2003 dry heat wave in southern Europe, with a temperature of 113 F (45 C) and 15% humidity.

In a hot and dry room, turning a fan blows hot air toward people, creating an environment similar to a convection oven. Jay’s team found that in dry heat wave conditions, fan use raised the internal temperature of research participants. Among elderly participants and those with age-related health problems, fan use worsened dehydration and increased the strain on their hearts. (Because of the alarming findings, his team terminated fan testing in these conditions.) 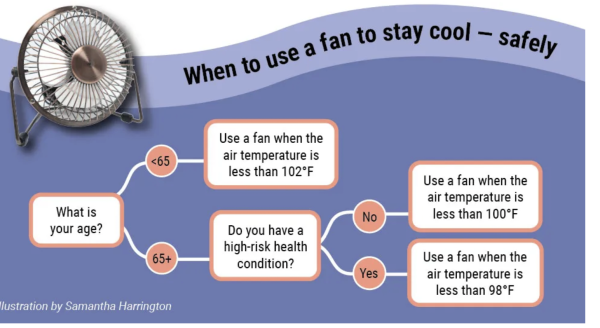 Jay adds that “self-dousing,” or drenching the body in water, is another tool to stay cool, especially in hot, dry heat or during a power outage. The water need not be cold – even tap water works – as long as the skin is wet. Water on the skin substitutes for sweat, allowing the body to cool through evaporation without the risk of dehydration.

Self-dousing may also be helpful outside, along with measures like finding shade, taking frequent rest breaks, and drinking water.

How the Body Cools Itself

Our bodies are exquisitely tuned to keep us within an ideal temperature range. When we get too hot, a variety of mechanisms kick in to cool us down to our “Goldilocks” temperature, Jay says.

The two main mechanisms are increasing blood flow to the skin and producing sweat.

In the first process, the blood vessels near the skin open up to divert blood flow away from our core and to the skin’s surface. That makes it easier for heat to radiate out from our bodies and into the air. This mechanism works well until outside temperatures get close to or hotter than our own body’s temperature, around 95 degrees Fahrenheit (35 C). At that point, heat can start moving from the air into our body.

So when the air temperature is above our body’s temperature, sweating becomes the main way we can cool off. Sweating reduces excess body heat through evaporation. But on humid days, the air is already saturated with moisture, so it takes longer for sweat to evaporate into the air. On those days, the sweating mechanism is not as effective.

Why Heat is Sangerous to the Body

In some situations, our protective mechanisms can lead to organ damage and death.

As the blood vessels under our skin expand to move blood to our body surface, our hearts have to pump harder and faster to keep our blood pressure up. Heat strain becomes heart strain. People with heart conditions are much more likely to die during periods of intense heat.

Increased sweat production can lead to dehydration, especially over a long period of heat exposure, putting even more strain on our hearts and damaging other organs such as our kidneys.

When our bodies overheat, we can start down the path to heat stroke. The first symptoms are usually muscle cramps and flushed skin. Victims may then progress to heat exhaustion, with symptoms of nausea, vomiting, weakness and even fainting.

Ultimately, extreme heat stress can lead to a life-threatening emergency known as heat stroke. In this situation, the body continues to work to keep blood pumping to the surface of the skin, depriving other organs of oxygen, leading to organ damage. The body’s core temperature rises quickly, setting off a cascade of irreversible tissue breakdown, inflammation, and nerve signaling collapse. Without early cooling, death rates can be as high as 80%. For those who survive, organ damage can last for years, with long-term effects lasting for decades.

So as the world continues to warm, it’s more important than ever to understand how to stay cool and avoid the health dangers associated with high temperatures.