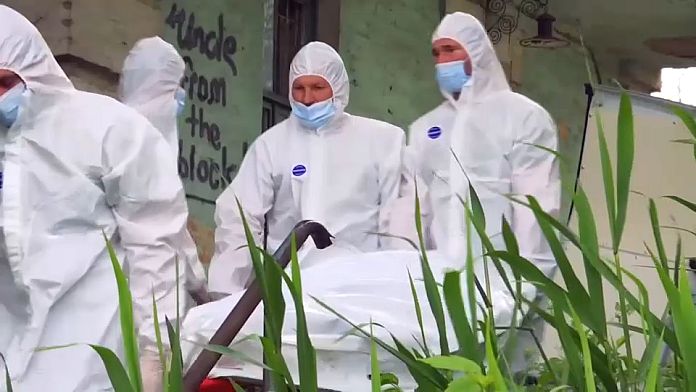 Ukrainian troops are preparing to send the bodies of dead Russian soldiers back across the border. The authorities claim to act in accordance with international law.

The remains of the soldiers were moved to a facility outside Kiev before being loaded onto refrigerated trains waiting to be transferred.

The head of Ukraine’s civil-military cooperation department says that even though these transfers are part of international protocol, the Kremlin has not appealed for the restitution of the bodies.

“Several hundred (Russian) occupier bodies are kept here. There are many of these trains on the territory of Ukraine. They will be kept here until the interstate decision to transfer these bodies is made. The Ukrainian side is ready. to deliver them tomorrow or even today. However, so far there have been no calls from the Russian side to receive these bodies, “said Colonel Volodymyr Lyamzin of the Ukrainian army.

Moscow has reportedly ignored repeated offers to return the dead, while Ukrainian officials say Russia is more concerned with covering the extent of casualties and is willing to abandon its troops.

The Kremlin claims to always recover its dead. However, no casualty data has been provided since late March, when Moscow claimed 1,351 Russian soldiers had been killed and 3,825 injured by the invasion.

According to Western estimates, the Russian military suffered more casualties in Ukraine in two and a half months than Soviet forces in Afghanistan during a decade of Soviet occupation in the 1980s.

On Friday, the Ukrainian military estimated the number of Russian casualties to be around 26,900. The figure cannot be confirmed.