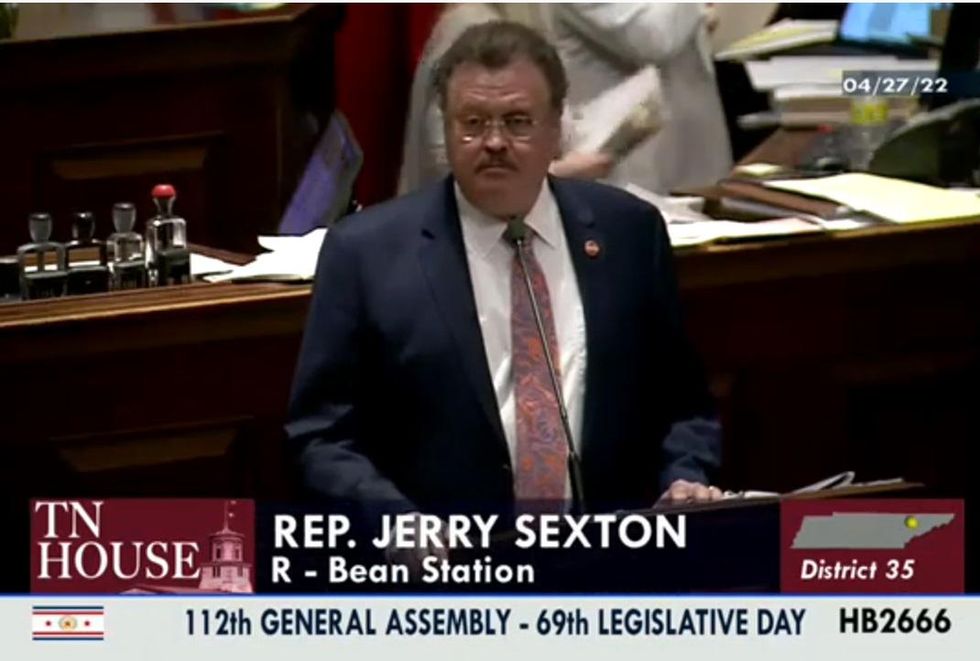 The Tennessee General Assembly passed an exciting new bill on school censorship Wednesday that will give a politically appointed commission the power to decide which books are allowed in each school library in the state. No more worries about local scrutiny, because the commission will now be able to dictate what children across the state can read. And to sweeten the deal, House sponsor State Representative Jerry Sexton (R) said that if it were up to him, any books not approved by the committee would be burned. Unfortunately for the most warrior censors of culture in the Lege, actually setting fire to books hasn’t become a law. There is always next year!

We also feel compelled to point out that Rep. Sexton represents a place called “Bean Station”, which frankly sounds a little too bold for the good God-fearing people of Tennessee. I don’t want ladyfolk to have ideas.

As Tennessee reports, the account, with the actual that we are not inventing this account number HB 2666, it had previously passed in the state Senate as a far less horrible plan

add members to the state textbook commission and instruct the commission to provide guidance to schools as they review materials to make sure they are “Suitable for age and maturity levels” of the students.

We certainly like it when moral panic promoters use the Number of the Beast in their culture warfare projects. Idaho lawmakers, you will recall, jail librarians with HB 666 earlier this year, although the proposal died in the state Senate.

But simply providing guidance and creating general standards was apparently too liberal and weak for Sexton. First, he added an amendment that would have required the committee to publish a list of “approved” teaching materials that could be used in Tennessee schools, thus ensuring that no teacher could ever pollute the minds of children with everything which had not been controlled at the state level. The flowers, by state decree, would be redand teachers would color damn safe only within the lines.

This sparked a lot of controversy, so Sexton withdrew his amendment Wednesday morning; HEY quickly replaced, however, with the amendment eventually passed, which would require the expanded textbook commission to review the holdings of all school libraries in the state. The commission could approve or reject entire library collections or identify particular materials for removal.

As House and Senate versions differ, the bill will have to go through a conference committee, where the stupid provision on censorship could still be removed before HB 2666 goes to Gov. Bill Lee (R) for a signature. Or hell, maybe it will be done worse. It’s that kind of year.

In the debate on the amendment Wednesday, a fellow Democrat, Democrat Rep John Ray Clemmons (D-Nashville), asked Sexton what he saw fit to do with all the books removed from school libraries as part of his plan.

Clemmons: Let’s say you get these books from the library. What will you do with them? Will you put them on the street? Set them on fire? Where are they going?

Sacristan: I have no idea, but I would burn them.

Clemmons: That’s what I thought. Thank you Mr. President.

Sexton later made it clear that while burning books might be his preference, no one had to worry that no books were burned in any way, because he wouldn’t be a member of the commission after all, so stop worrying.

He also offered the reassuring thought that “We are not banning books, we are just removing them from the library.” Yes, really.

Sexton also insisted that the Textbooks Commission would surely remove only the most horribly blatant examples of questionable books, though he didn’t specify what they might be. Maybe just books with bad words, gays, sex and maybe Jews? Who knows!

Also, like the Tennessee notes, the text of the bill in reality it does not define much other than requiring that the materials are “appropriate for the age and maturity levels” of the students and that they are also “suitable and consistent with the educational mission of the school”. So, in reality, a lot would depend on who was appointed to the commission, not that there is the slightest chance that he could end up being full of ideologues.

Oh, wait, there has already been an uproar for the commissioners, even in its current form. In 2021, the Tennessee House confirmed right-wing activist Laurie Cardoza-Moore, who made a name for themselves by sparking fears over the construction of a mosque in Murfreesboro, arguing that 30 percent of Muslims are terrorists and that the mosque would be a base for “radical Islamic extremists” bent on destroying Nashville’s Christian music industry .

During his confirmation hearing, explained that bad school textbooks are directly responsible for the destruction of America:

While America slept, the hearts, minds and souls of our students were affected by misinformation. Tragically we have seen the result in the last few months; our streets have been filled with rioting and destructive young Americans who have not been taught the values ​​entrusted to us by our nation’s founders … nor have they been taught the history of our nation – a history that many seem intent on destroying

Unsurprisingly, Cardoza-Moore did too defended the insurrection of January 6, 2021 (it was ANTIFA!), there were claims that the The COVID-19 vaccine is not truly a vaccineand in 2020 he insisted that Black Lives Matter seeks to eliminate Christianity – so patriots have to get rid of all evil textbooks that deceive children and turn them into communists.

sounds like just the kind of person that Tennessee needs to decide which books will be allowed in Tennessee’s school libraries.

Make your purchases on Amazon via this link, for reasons.